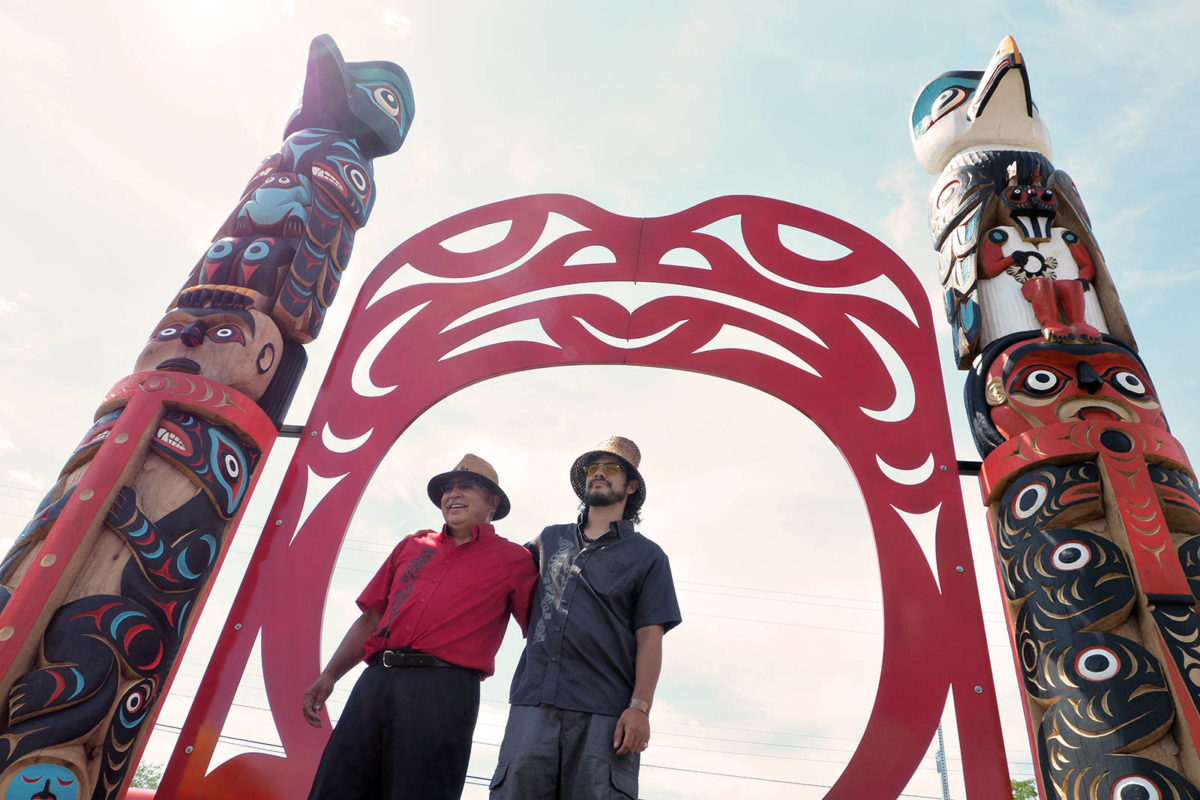 William Good, left, stands with his son Joel by totems joined by a steel frog symbol that were designed and carved by Joel, a Snuneymuxw artist. A dedication ceremony was held Wednesday for the creations that have been raised on the traditional site of a Snuneymuxw village at Departure Bay. (CHRIS BUSH/The News Bulletin)

It’s a mark of the First Nation’s traditional territory and a welcome to visitors who almost always came from the sea, according to Snuneymuxw First Nation artist and carver Joel Good. His creations, two totems joined by a steel symbol of a frog, now greet travellers sailing into Departure Bay.

The works, which were designed and created over seven months as part of a two-year long joint project with the City of Nanaimo, were installed at Departure Bay Beach on Tuesday followed by a blessing and dedication ceremony on Wednesday.

They stand on the former site of a Snuneymuxw village.

“All of our artwork faced the ocean because all of our guests arrived from the sea,” Good said. “I was asked to do them facing the road actually, but I said nope, that’s not our way. Mind you it looks great in the summertime, people are going to be out on the beach, too.”

The sculpture represents a continuing revival of Snuneymuxw art that began with his father William Good – who contributed by guiding Joel and even helping with the carving where needed during the project – and has been continued by both men through research and rediscovering traditional skills that are blended with modern techniques when required.

“My dad was the first to study in old museums across the United States and seek out our traditional artwork and revive it,” Good said. “Now for me to be doing something like this is really big.”

The poles, each more than five metres tall, were carved from yellow cedar donated by TimberWest. The work was commissioned by the city in 2016 when it upgraded beach access and parking.

“It’s very proud day today that we come together to honour our members who have provided our community with a very beautiful piece of artwork that is going to let the world know who Snuneymuxw is,” said Chief Mike Wyse, addressing a gathering of about 100 people representing the First Nation, Good’s family and the city.

Chris Barfoot, city culture and heritage coordinator, said in a speech that he believes art and culture has the power to be a catalyst for communities to grow and thrive, especially through collaborations between cultures and he offered a special thanks to the Good family.

“They have made me feel so welcome in their home and their willingness to share their culture has truly had a significant impact on me and the work that I do here for the City of Nanaimo and I would like to thank the Snuneymuxw First Nation for such a positive partnership,” Barfoot said.

Good said the placement of the artwork is “like taking back what was ours in a sense” and a representation that should have always been there.

“Oh, man, to represent our people and our family, which are of the hereditary chief clan – just to represent us on our traditional home. This is where our houses were. It’s such a big deal,” he said.