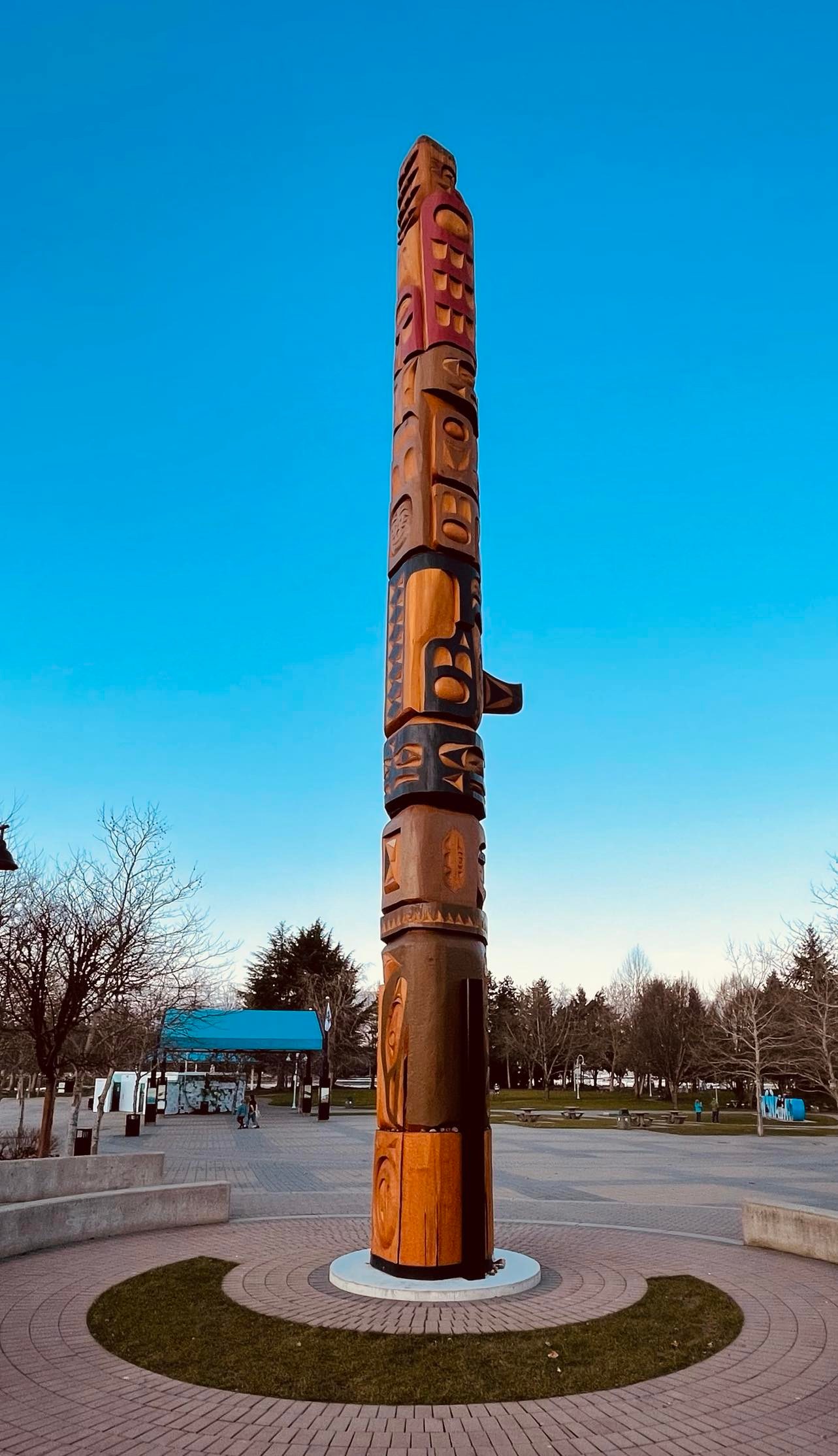 "At the base of the pole is a matriarch, followed by an orca, bear and an eagle on top.

“Matriarch holds us all up, killer whale protects us at sea, bear watches over us, eagle carries our prayers up to the creator and tells us when the salmon are coming,” Brown explained."

"designed with direction from Snuneymuxw elders council, of which his father Jerry is a member"

"Snuneymuxw First Nation and the Nanaimo Aboriginal Centre, which is contributing $42,000 from a Canadian Heritage grant, as well as a 50-foot cedar log from Mosaic Forest Management valued at more than $5,000."
"Carver Noel Brown of Snuneymuxw and Kwagulth First Nations has been selected as lead artist."

"Maffeo Sutton Park’s Spirit Square, location of the Breaching Orca sculpture, is being considered. The report added that the project is expected to take up to six months to complete with an unveiling tentatively scheduled for June 21, National Indigenous People’s Day"

Was commissioned by Parkshore Projects Ltd. to do a sculpture in metal at Outlook 119 Haliburton St., and a forthcoming work at the NE corner of Haliburton and Milton next to Prospect, a --unit building under construction as of this writing.

"Noel is a member of the Coast Salish and Kwagulth people. He is a resident of Nanaimo, which is on the East Coast of Vancouver Island. Noel comes from the Brown/Lewis family; his mother Donna Brown and father Jerry Brown.

Noel was taught by many; Richard Baker, Matthew Baker, Chris and Doran Lewis and Craig Manson. His inspiration is James Christopher Lewis. Noel has been carving since late 1995. Grandfathers on both sides of the family were good carvers. Noel's grandmother is a resident in Cape Mudge, so he has been interested in art all his life. His family has a strong artistic background."

Sign up to receive local news highlights straight to your inbox with our weekly newsletter, Nanaimo This Week.

Noel Brown’s ancestors lived along the Nanaimo waterfront for thousands of years before the arrival of Europeans. As such, it could not be more fitting that Brown—a local carver of international renown and member of Snuneymuxw First Nation—was selected as lead artist on a welcoming pole to be erected there this fall.

Swy-a-Lana, also known as Maffeo-Sutton Park, was the site for thousands of years of a large Snuneymuxw gathering place. It was one of many villages that dotted shorelines along the eastern coast of Vancouver Island, the Gulf Islands and the Fraser Valley.

["Geraldine Manson, Snuneymuxw elder-in-residence at Vancouver Island University, says Sway’ A’ Lana or Sxwalana lagoon derives its name from Sxwayum, the traditional name for the Millstone River, which is named after a goldeneye duck.

“The story goes back in the day when the young duckling was born and all others saw a strange-looking bird because of the golden eye,” Manson said, in an e-mail to the News Bulletin. “One day the loon came and tried to take over the river space and tried to drown the duckling but failed and instead the duckling grew strong and won all his battles with the loon. The river became his home.”"]

Making seasonal rounds was an integral part of the Snuneymuxw way of life, and culture. The village at Nanaimo Harbour, which is named xwsa’luxw’ul, was occupied during early spring as the Snuneymuxw followed the herring run, according to the nation. After the herring run, black ducks and other waterfowl were hunted in coastal waters. By April most families had moved to other village sites following salmon and other fish, and the village of Stiil’nep at Departure Bay was occupied as winter set in.

The Snuneymuxw welcoming pole will be installed at the parks’ Spirit Square, the current location of the sculpture Breaching Orca by artist Carl Sean McMahon. Breaching Orca will be relocated, possibly to Neck Point Park.

Most evidence suggests that carved poles originated with the peoples of the Northwest Coast then spread south and up the major river valleys of British Columbia, according to the Bill Reid Centre at Simon Fraser University.

It is believed that the only coastal people who did not traditionally create these poles were the Coast Salish; they created large carved planks attached to the inside and sometimes outside of their ceremonial dance houses and these cultural practices continue to evolve.

The history of his ancestors in the area makes the location of the 50-ft welcoming pole coming to Nanaimo’s waterfront even more appropriate, says Brown.

“I’m very happy with the location of Maffeo-Sutton Park, as it’s where one of our villages used to be,” he says. “And it overlooks both Newcastle and Gabriola Islands, which is where two of our other villages were.”

He sums up the significance of the project for himself and the Snuneymuxw.

The project is a collaboration between the City of Nanaimo, the Snuneymuxw First Nation and the Nanaimo Aboriginal Centre (NAC) and aims to contribute to the process of reconciliation between Indigenous and non-Indigenous communities.

Brown says he is both very honoured and lucky to have been chosen to spearhead this project. “It will be here long after I’m gone.”

He acknowledges, however, that the design of the welcoming pole was very much a community effort, and that the elders took a year to approve it.

The top of the pole is an eagle, which signifies strength and wisdom. Under that are a bear, a killer whale, a woman, and some swimming salmon.

Brown speaks to the significance of each.

“The eagle overlooks Jack’s Point, and will tell us when the salmon are coming”, he says. “When the bear roars, we know to get ready for the salmon. The killer whale is our protector at sea. And the woman is an ancestor telling us to take care of the land, and each other.” Brown laughs ruefully as he adds, “But we don’t listen.”

Elder Jerry Brown (Noel’s father) is proud that his son, who has been a professional carver for the last 25 years, was chosen for this project. He laughs when he remembers how he “blew a gasket” many years ago when his son expressed an interest in being a professional soccer player.

He says he worked hard to instill the teachings of the Snuneymuxw into his son and family.

“When you go out on the water, and you are out of sight, pull hard”, he says. “When you are really tired, and feel you can’t do anymore, reach down, bring that third or fourth level, that’s what you train for. Go harder. Go deeper. And make good choices, because in the end they define who you are.”

Brown has work on display throughout the city, from the Nanaimo Museum to Vancouver Island University to the Departure Bay ferry and Nanaimo cruise ship terminals. His designs are also a part of the new inclusive playground at Maffeo Sutton Park.

The welcoming pole is slated to be installed in late September and a public ceremony will be held on Sept. 30.

Find out more about this incredible artist on his Facebook Page, Noel Brown Native Art.

Can see more of his work at https://ihosgallery.com/collections/noel-brown