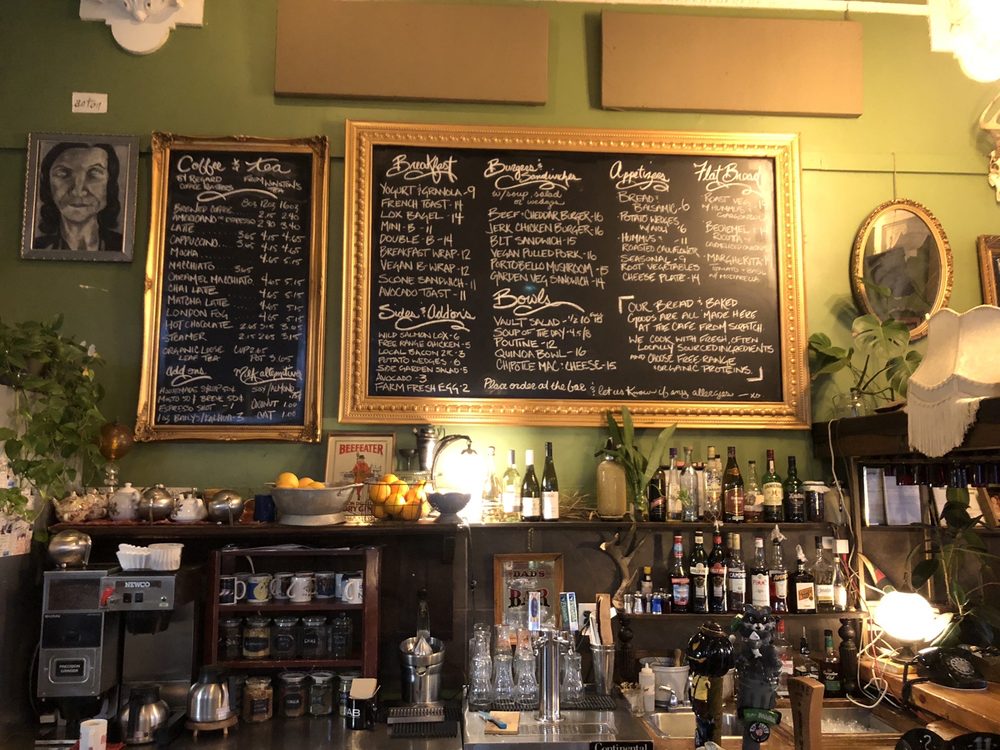 "The Vault Cafe is a cafe, restaurant, and live music venue located in Nanaimo, BC."

With its pink exterior…

Soundtrack from a Wes Anderson film

Stands out in Nanaimo as the singular purveyor of rich euro American musical culture, folk, punk and unpretentious hip; it’s like being in a film…

An eclectic museum of antique oddities and folk kitsch
No less than 12 hanging lamps and chandeliers
No less than 17 floor and table lamps, +3 in the bathrooms
Verdant and fecund with plants life.. distributed and growing
Building itself = a testament to old financial opulence,

A hangout for VIU students, locals, Nanaimo newcomers…, dropping in from the north end
Runners and Cold dippers from departure bay dropping by to warm up

Grand arched windows, 20 foot ceilings, bathed in natural light, but lamps make it cozy inside even on the greyest coldest rainiest Nanaimo day…

Part of the scandal-ridden Rattenbury legacy in Nanaimo... Merhcants Bank of Canada... turned cultural and eatery venue...
by
Editor
WHAT CAME BEFORE

a victim and product of international and local politics and culture...
by
Author
BULLS-EYE

Finally, something else you can do - besides stocking up at Costco - to prepare for the zombie apocalypse.
by
Jaclyn Chapman
HISTORY

The harbor at the center of what is now known as Nanaimo was allegedly first "discovered" in 1791 by Spaniard Juan Carrasco.
by
Robert Turner
URBAN ACCESS

Is Nanaimo a 15-minute city? We find out where Nanaimo urbanites walk to everything they need in a quarter hour or less.
by
ROBERT
GRITTY PRETTY

Nanaimo: A City Waking Up To Itself

International from its beginning... between first nations, then between modern colonial nation states...
by
Brutally Local, Brutally International
BRUTAL BEAUTY

There is a light that never goes out

Abutting Nanaimo's South End and dominating the Port Authority harbor land, the.... both harkens back and glows warmly....
by
Editor