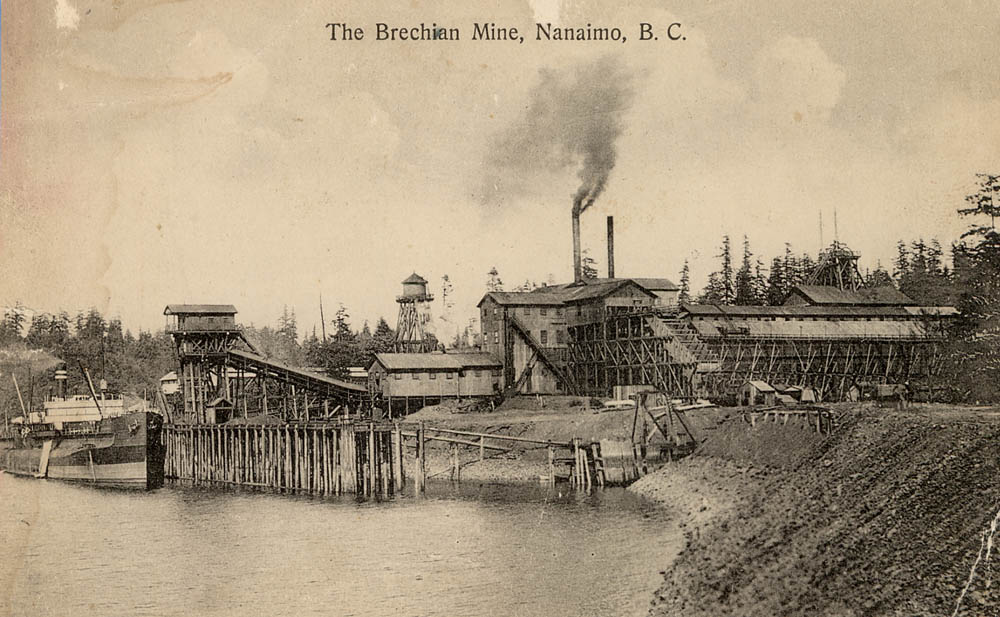 Below the surface, under your feet... hundreds of years ago, you can almost feel the creaking, grinding carts... sweat dripping... the smell of methane as a lamp starts turning blue....

For thousands of years... Snuneymuxw...

pre-Confederation treaty with the Crown – the Treaty of 1854

The harbor at the center of what is now known as Nanaimo was allegedly first "discovered" in 1791 by Spaniard Juan Carrasco. The Spanish called the harbor Bocas de Winthuysen eponymously after the naval officer on board the ----.

In 1850, Chief Che-wich-i-kan brought coal to Victoria to (successfully) assert rights of ownership and mining over Snuneymuxw coal. Just a few years later,

coal deposits are reported to have been first discovered in 1849...

In 1852, the Hudson's Bay Company took possession via Joseph William McKay, as directed by fur trader and first Governor of the Colony of British Columbia, James Douglas (1803 - 1877)

map of mine locations, diagrams of partial collapses under Victoria St.

28 Nicol St.
The cairn in Pioneer Square marks the location of the Park Head Slope, one of the initial mine
workings in this area. To this day, the foundations of the city are criss-crossed by the remains of
many of these early mine tunnels.
The cairn was built in 1938. The small metal bastion that once capped the cairn is now missing.

Part of the scandal-ridden Rattenbury legacy in Nanaimo... Merhcants Bank of Canada... turned cultural and eatery venue...
by
Editor
WHAT CAME BEFORE

a victim and product of international and local politics and culture...
by
Author
BULLS-EYE

Finally, something else you can do - besides stocking up at Costco - to prepare for the zombie apocalypse.
by
Jaclyn Chapman
HISTORY

The harbor at the center of what is now known as Nanaimo was allegedly first "discovered" in 1791 by Spaniard Juan Carrasco.
by
Robert Turner
URBAN ACCESS

Is Nanaimo a 15-minute city? We find out where Nanaimo urbanites walk to everything they need in a quarter hour or less.
by
ROBERT
GRITTY PRETTY

Nanaimo: A City Waking Up To Itself

International from its beginning... between first nations, then between modern colonial nation states...
by
Brutally Local, Brutally International
BRUTAL BEAUTY

There is a light that never goes out

Abutting Nanaimo's South End and dominating the Port Authority harbor land, the.... both harkens back and glows warmly....
by
Editor